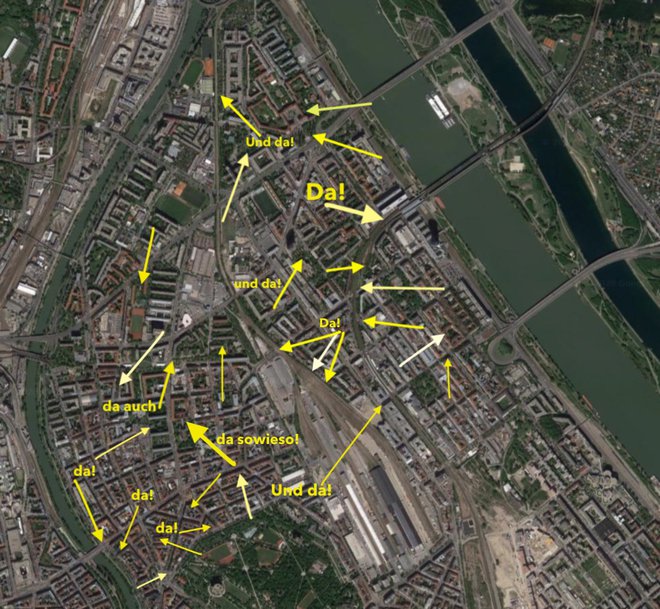 In late summer of this grisly Year of the Virus 2020, we will be crash-landing all over Vienna’s 20th District, our beloved Brigittenau, with a mighty ZONK!?!! In spaces both public and private, we’ll be shoring up our collective optimism. No government in the world can create a kaboom, a mega-kaboom – a full-on ZONK!?!! – the way we can. Sure, we may not be responsible for national budgets…but what would the “new normal” be without our completely normal music?

ZONK!?!! is a project by the ensemble Studio Dan. Originally titled VIRUS HANDELSKAI (and at one point TONIKUM HANDELSKAI), it was postponed and reimagined several times due to COVID-19. The focus is a 10-day “musicalization” of the 20th District, including the installation of sound sculptures and accompanying performances. Passersby will experience art (music, installations, sound installations, performance art, and dance) “on their way”; spaces that are otherwise purely functional will be cast in a new light; an entire district will be set in vibration.

In a previously unheard-of tour de force, the musicians of Studio Dan will fill the Brigittenau with music in every imaginable combination, ranging from solo to small orchestra. In flash mob-like performances and pre-publicized mini-concerts, contemporary classics like James Tenney’s Postal Pieces will be mixed with new Austrian music from the likes of Christian F. Schiller, Peter Kutin, and Christof Ressi. The musical spectrum will be further expanded with the help of Eva-Maria Schaller (dance and choreography), Susanna Gartmayer and Martin Siewert, as well as guests from home and abroad, including Ceren Oran (sound painting, dance), Matthias Muche and the ensemble STUDIO PERCUSSION Graz.

ZONK!?!! will also devote significant energy to promotion and music appreciation, both before and during the course of the project.
Realized with the support of SHIFT, an initiative of the City of Vienna dedicated to the improvement of local cultural events throughout the city. In cooperation with Brigittenau district council and wohnpartner – together for a good neighbourship.